Use this tool when: 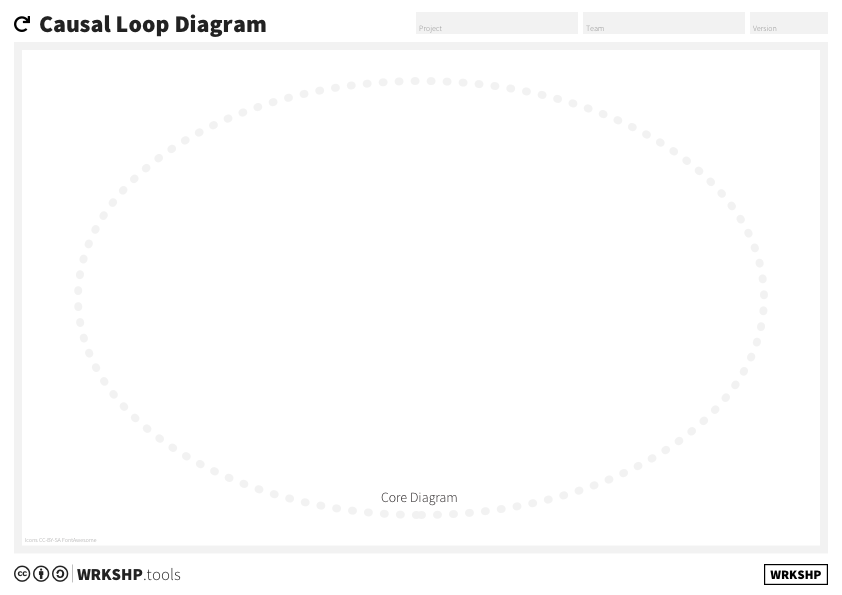 What is it and when should I use it

The problems startup teams and innovators have to deal with are often complex and interconnected. And although it would be nice to have a clear mental model to use for every situation, in reality it’s simply not possible to disentangle the web of relations and consequences connected to the problem you want to solve.

For example, starting to build a new product might require staff to be trained, which will impact hiring and education budgets, and the new product changes staff time allocation, which in the short term influences their business unit’s bottom line. There are myriads of such connections that might be important to your new product or startup.

Systems Thinking – the more ‘organized’ brother of Design Thinking and Visual Thinking – deals with such complex questions. It has been described as a ‘language’ that can help describe and communicate the complex, interdependent issues managers and entrepreneurs face on a daily basis.

The Causal Loop Diagram is one of the tools in the Systems Thinking toolbox. It is a visual representation of the complex entangled net of relationships and dependencies, and it can tell you how one part of the network influences other parts.

By looking at the problem through the lens of the Causal Loop Diagram, you can become more aware of the structural forces that produce sometimes puzzling behavior.

Tip! The Causal Loop Diagram can be used very well to help understand the problems a customer is facing, especially in a B2B setting. Try mapping out a diagram together with your customer!

The nodes in the diagram are the variables of the system. Think of variables as (potentially) measurable quantities, such as the number of customers, an NPS score, or market penetration.

The edges (the arrows) represent how variables are connected. If one variable’s change is connected to another variable’s change, there will be a connection between them. The arrow indicates the direction of the influence, and the ‘+’ or ‘-’ sign tells you how the variable will change.

Tip! The direction of the arrow is important. This example tells you nothing about the other direction, ‘revenue’ might grow or shrink with no effect on ‘customers’

Together, the nodes and edges can create complex networks, and, more importantly, loops. Finding these loops is the point of the exercise, as the name Causal Loop Diagram may have given away. 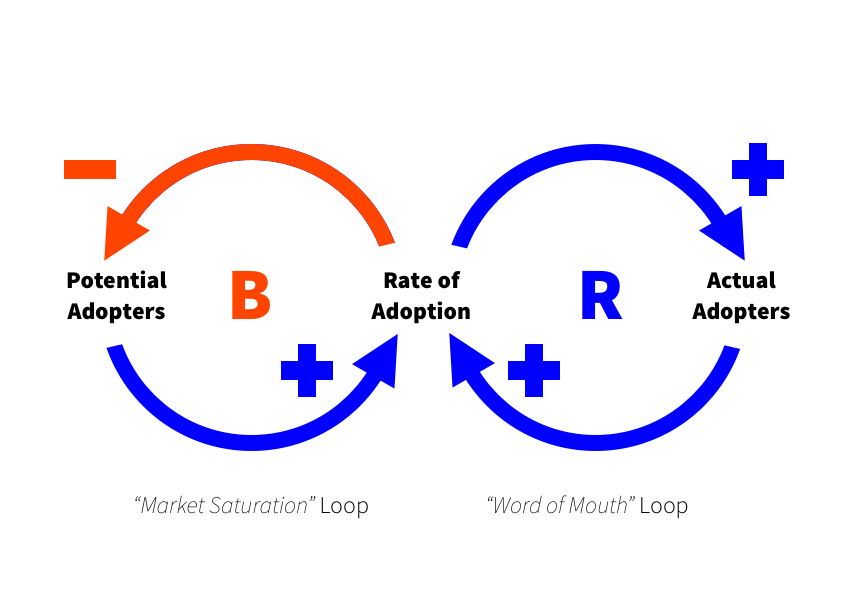 Think of the adoption of a new app. The example graph shows two feedback loops, a reinforcing loop on the right labeled ‘R’, and a balancing one on the left labeled B.

At first, the app is unknown, and has only a few users. Those users talk to their friends, and influence some to also install it. They are enthusiastic, and tell even more people. The number of users starts to grow exponentially. This exponential growth is driven by the ‘word of mouth’ loop on the right.

After some time, the newest group of people adopting the app runs into difficulties trying to enthuse more people through word of mouth: many of the people they talk to already have the app installed. The growth rate starts to slow down.

Finally, an equilibrium is reached between the two loops.

Of course, in the real world, the loops are not always so neat. They might operate over multiple levels of connections and be much more messy. Luckily, there is a trick to finding these loops, and labeling them as ‘balancing’ or ‘reinforcing’.

The connections in the diagram don’t act all at once. There often are delays, where the influence of a variable change takes time to trickle down to other parts of the system. These delays may influence the strength with which balancing and reinforcing loops work and cause fluctuations to happen.

An example: An entrepreneur of a small company makes a cashflow prognosis, and notices that the next few months not enough projects have been sold. This causes part of his workforce to idle. He kicks off a big effort to turn the situation around, and through this ‘all hands on deck’ situation the team manages to net a substantial amount of new orders. The team subsequently is swamped with the amount of work, and has no time to do sales. The work dries up, and the system is back to the starting point.

To illustrate this oscillation, the entrepreneur decides to map the system with a causal loop diagram. 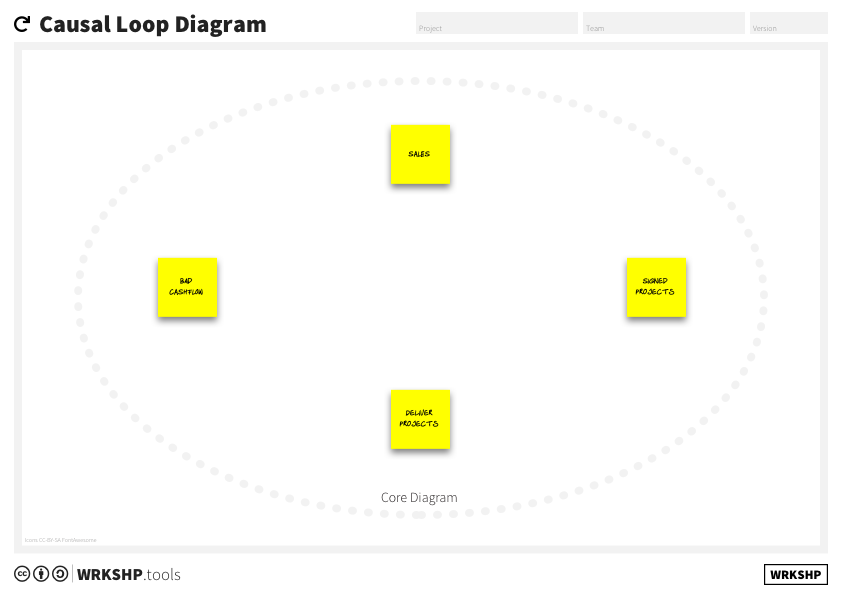 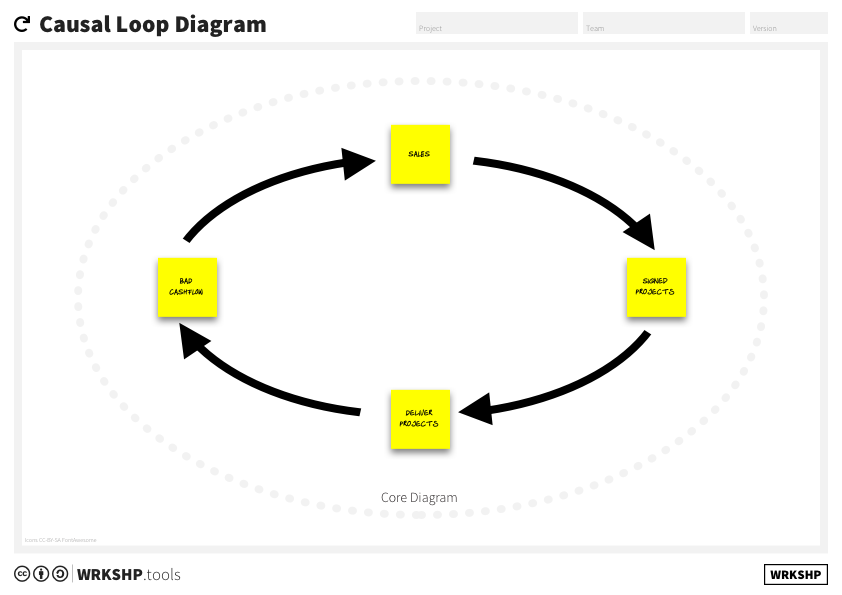 But, looking at the company situation, he also realizes there is another relationship at play: the delivery effort influences the sales effort. 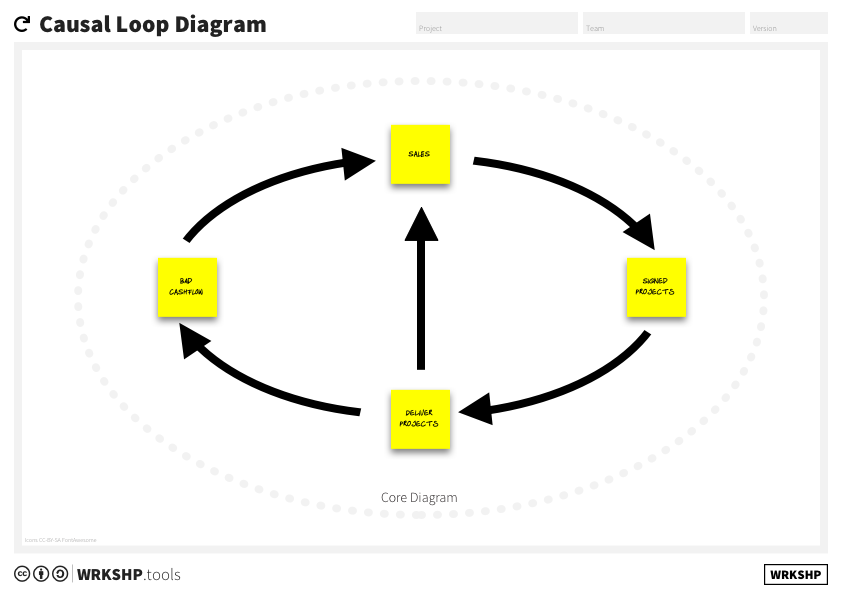 Next, it’s time to see how these variables influence each other. Going through the diagram, he asks himself the question: if this variable’s value increases, what happens to the variable it influences? Does it also increase? Or does it decrease? If the increase leads to an increase, or a decrease leads to a decrease, the arrow is ‘positive’ (blue). Otherwise it is negative (red). 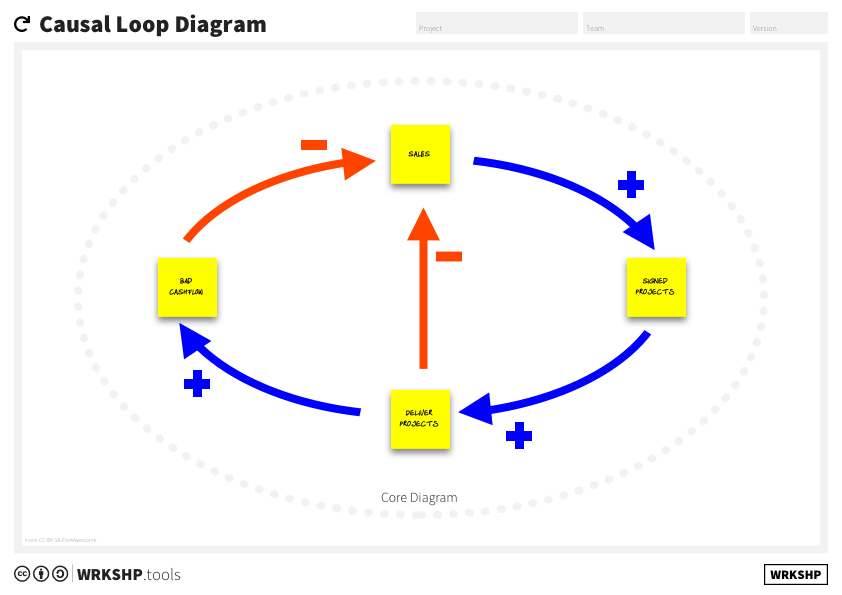 Finally, it is time to investigate the loops in the diagram. There are two loops:

Tip! The arrow from ‘cashflow’ to ‘sales’ is negative: the reason is that the effect is reversed. Lower cashflow means more sales effort. 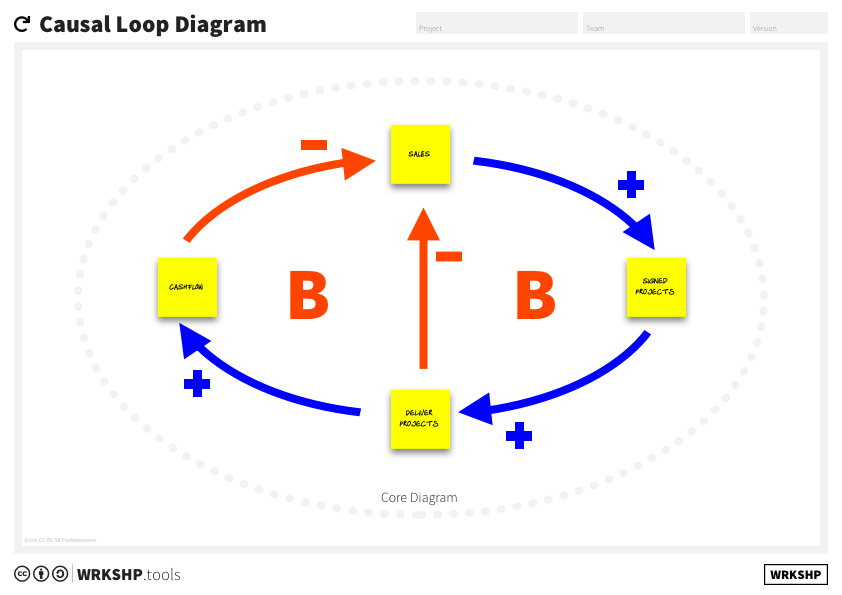 The fact that this loop balances itself out is that the sales effort is apparently connected to the cashflow. The direct evidence is the ‘all hands on deck’ effort by the entrepreneur.

Looking at these two balancing loops, it is clear that although this system (sort of) protects against a very bad cashflow situation, it will never turn into a reinforcing system. The situation will improve for a while, and then it will reverse itself to where it started.

The entrepreneur can now approach the problem with a better understanding. First of all, removing the dependency between the delivery teams and the sales people, giving each their own role rather than using an ‘all hands’ approach, will remove the second loop. This will make the system’s oscillation time longer, but it does not solve the problem. 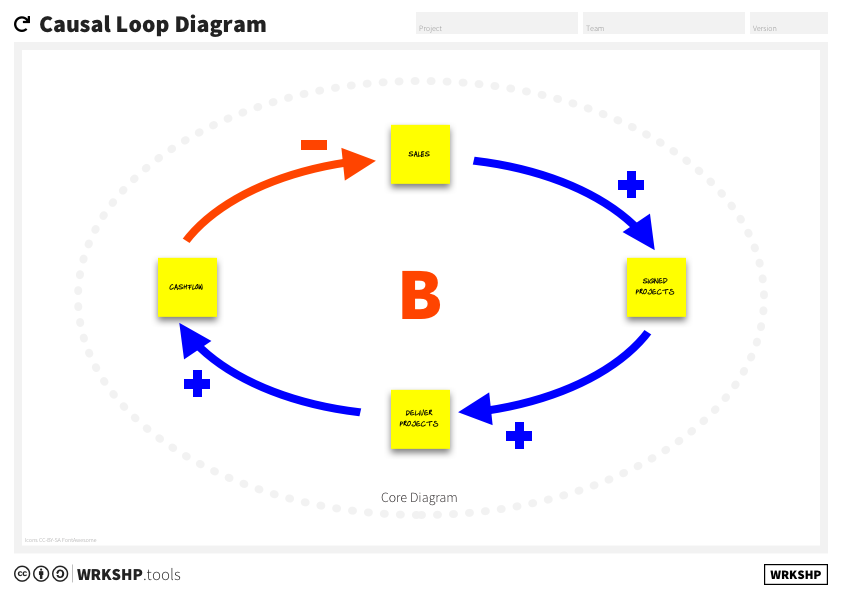 What is needed is a way to counter the negative coupling between cashflow and sales. There needs to be a reinforcement happening there. A way to do this might be (but for simplicity other consequences have been omitted) to invest in more sales people: 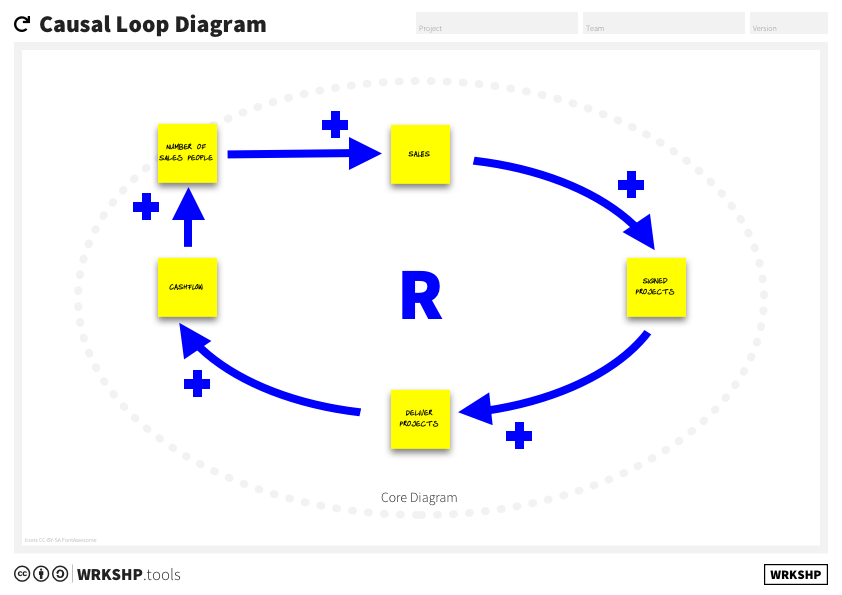 In practice, it will be the case for a new situation that another balancing loop would be established. Unchecked growth in essence never happens. In this example, the new loop would probably be that the delivery of products becomes a new bottleneck.

In this way, drawing causal relationships can help give more insight into how different parts of your business influence each other, and help you to find potential options to solve the problem.

Give the individual team members sticky notes, and reserve a big space on the wall for your diagram. Think of the problem you are trying to solve right now, and ask the team to start writing down the variables that come to mind. Variables are (potentially) measurable quantities that change over time.

After a few minutes, have team members map the variables on the wall. Duplicates can be removed.

Look at your wall together and try to see if you can come up with more variables that come into play. What are the variables you and the team care about the most?

Tip! There will be time later to add missing variables so don’t force yourself to be super complete here.

Take one of the variables as a starting point, and imagine it has changed over time. Which other variables will it affect? And is that a ‘positive’ or a ‘negative’ link? Draw the connection between the variables and mark it with ‘+’ or ‘-’.

Tip! It may be helpful to rearrange the sticky notes before drawing the link to avoid cluttering your map.

Tip! In this stage, you may find that some connections are not direct, but have an intermediate new variable you haven’t mapped before. Simply add that variable to the map.

Repeat this step for the next variable, until you either have mapped all of them or you start feeling the mapped connections are less relevant, for instance because they have a limited effect.

Now that you have mapped variables and connections, it is time to find and label the causal loops.

Perhaps one or two obvious loops immediately jump out at you. If not, there is a recipe to find them.

Start with a variable (for instance one of the variables you care about the most) and imagine its value grows. Follow the connections and try to get back to where you came from.

Tip! When you find a loop, it can be helpful to highlight the connections with a different color.

Tip! If you work digitally, it can be helpful to take some time to re-arrange the diagram so the loops are more clear and the diagram is decluttered.

When you have found a loop, count the number of ‘negative’ links in the loop’s connections. Is it an even number (including zero)? Mark the loop as ‘Reinforcing’ with a big R. Otherwise, it’s a ‘Balancing’ loop.

Tip! An additional way to double-check your loop is to draw the behavior of the system over time. A reinforcing loop shows exponential growth (or decay); a balancing loop tends to produce oscillation or movement toward equilibrium.

The Causal Loop Diagram helps you to craft a deeper understanding of the system. This understanding can then be shared with other team members. To do that, use the diagram to create a coherent story, explaining how the different parts of the system interact. This story, together with the diagram, can help you to share a deep understanding quickly.

Now that you have your diagram and your loops, you can use it to guide you in your change process and your innovation process.

Perhaps you want more exponential behaviour: think about how you can strengthen your Reinforcing loops, and weaken the loops that counterbalance the same variables.

For instance, how might you make it even easier for people to spread their enthusiasm for your product and thus reinforce your ‘word of mouth’ loop?

Or, perhaps you want to make your business more robust: where and how might you add more balancing behaviour to protect you against ‘bad’ feedback loops?

For instance, how might you protect yourself against a cascading failure in your systems? Or how might you put the handbrake on negative reviews before they start to influence your ‘word of mouth’ feedback loop?

The first tool guide: a 30+ pages step-by-step guide plus print-ready canvases in high resolution, a workshop screenplay, and examples.

Define the design criteria your product or service should follow and bring clarity to your innovation journey in under 45 minutes using the Design Criteria Canvas.

The 'Affinity map' is a way to organize ideas quickly without imposing an implicit structure. The organization 'emerges' from the ideas.

Increase sales, satisfaction, and retention by designing the primary interactions your customers have with your product or service as habits.

The Product Box exercise helps you when you need to convert an abstract concept into something tangible that you can evaluate with people that were not intimately part of the design process.

Get a new tool in your inbox every week

Sign up for free now and receive a weekly email with one new innovation tool straight to your inbox. 🚀